The Toombul Croquet Club is immersed in the history of Nundah.  Nundah is the oldest suburb of Brisbane.  It was originally settled by German missionaries who came to this area with Dr Lang for a new life. Australia is a young country and there are few places which can claim traditions, and old associates of the few, Nundah must be placed in the front ranking in Queensland.  At its foundation Brisbane was a bush township.  Nundah ranks as Brisbane’s first suburb, and claims association with events recorded years ago.  This year marks the 175th anniversary of the arrival of German Missionaries in Moreton Bay.  In 1838 the missionaries (the first free settlers) established a mission at Zion’s Hill -about a half mile east of the present Toombul Railway station.  They moved to become self sufficient, raising cattle and cultivation.

In 1881 the State government purchased a strip of land from a resident to build a railway linking Brisbane and Sandgate.  The railway was completed in 1882 providing access to the north side of Brisbane.  This resulted in a surburban, residential construction boom.  The new railway station,  originally titled German Station was renamed Nundah.  The name is derived from the Aboriginal name for the area, meaning waterholes thus Nundah became the official name of the new suburb.

The area where the Croquet Club is was known as the Nundah Park, housing cattle, ready for shipment but after the railway line went through it had no further use.  The Stationmaster of the Nundah Railway Station (Mr Oxenham) saw the potential to have the  area declared a recreational area for the community.  He made representation to the government and 1901 was declared a Recreational Area.  It was renamed Oxenham Park in his honour.  Before the war, the Nundah Show was held there, as well as cricket, tennis and school sports.  Croquet became part of the area in 1928.  At the present time Australian Rules Football is played there also.

The club house is another piece of history.  It was formally the Misses Franz Schoolhouse - one of the many private small schools in Brisbane.  Those who could afford the fees went to these schools. It was originally in Best Street in Hendra.   The aim of the school was to give young people well rounded in life with emphasis on English, Mathematics, German, French, History and Geography.  Ideals such as courtesy, kindness, and charity was high on the list of objectives.  Two of the more celebrated pupils were Sir Samuel Griffith (who was instrumental in producing the Australian Constitution) and Sir Charles Lilley.

The building was transported to its present site in 1928.  It would be interesting to know whether it came by Horse Dray or on the back of a truck.  The building is in original condition and the Club members take pride in its appearance.  The members have been in residence for over 85 years playing the wonderful game of croquet with all its complexities making for an enjoyable game. 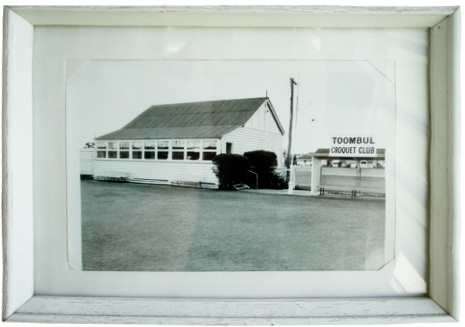 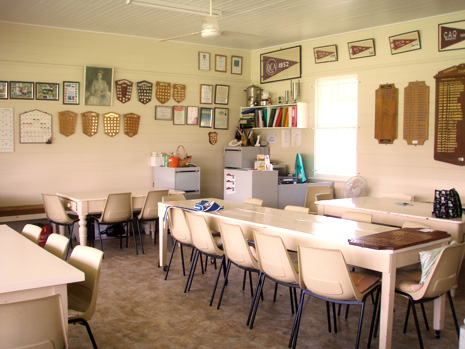